Homeopathy is a scientific and effective healing system which helps the natural tendency of the body to heal itself.

It is a REACTIVE medicine:

It stimulates the response capacity of an individual faced with an illness by re-establishing the disrupted biological balance.

It is based on an integrated concept of the psyche and body of the Human Being, in which man is not considered a perfect machine, whose health is dependent on the good functioning of the set of parts it is made up of.

This notion of unity between the physical and the psyche in the human being in the state of illness and health is the most difficult to understand for people starting a homeopathic treatment: homeopathy is like any other so called alternative or not conventional treatments, but it draws from the premise that a living being is more than just an ensemble of constituent parts.

Something differentiates it from inanimate beings, a STRENGTH or VITAL ENERGY that coordinates all of its organs and makes it work in harmony. Therefore in homeopathy it is not about curing the organ or element not properly functioning, but rather about BALANCING the living being as a whole, balancing that VITAL STRENGTH which is now altered. This imbalance is manifested by ways of SYMPTOMS, which is how an illness is manifested and which, in each person, is expressed according their own genetic, biochemical, cultural, etc. characteristics. Homeopathy values symptoms positively as a visible expression of that loss of internal ORDER AND HARMONY. It is not about combatting them but about finding out through them what is happening to the patient. 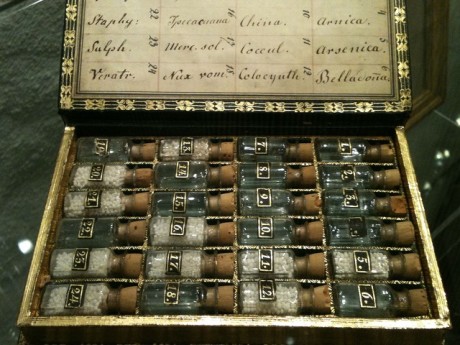 It is a therapy in which a very small doses (infinitesimal) of a substance is administered to the patient, which if administered in greater doses (dose by weight) to a healthy subject, will cause similar symptoms to those of the ill subject. This SIMILARITY between the symptoms of the ill person and those caused by substance X when experimented on healthy people will enable the homeopathic remedy to heal.

Sometimes homeopathy is identified with phytotherapy (plant therapy), but while many homeopathic medicines are obtained from the plant kingdom, it is not limited to it and also employs elements from mineral and animal origin. These base substances need to undergo a complex preparation, being this special process, following the homeopathic method, fundamental for the desired result.

After obtaining the “Mother Tinctures” from the base materials, they are subjected to a series of successive dilutions and revitalisations (shaking), in such a way that the final product is many times over devoid of molecules and acts therapeutically, not through the presence of residue molecules but through the “specific” information contained. The “footprint” of the base substance is registered in the water due to the physical and chemical changes produced during the dilution-revitalisation process: under certain circumstances the water can receive and store information about the substances it has entered in contact with and can transmit this information to presensitized biosystems.

The structure of water can be easily affected by pressure generated in the revitalisation, the formation of colloidal nano-bubbles, by electric and magnetic fields and by “epitaxial” (transmission of structural information from the surface of a material, usually a solid, to another, usually a liquid), a concept belonging to the science of materials.

The action of high dilution evidence obtained in animals, in isolated organ systems or in vitro cells has been accumulated in the last decade but molecular pharmacology is incapable of giving an explanation as to how these high homeopathic dilutions work.

Researchers throughout the world from a range of different disciplines are proving the scientific validity of homeopathy in order to achieve public and political recognition.

Even though the evident pharmacological, biological and therapeutic effects have been observed, the action mechanisms have not yet been accurately established.

It is possible that research in quantum physics, nanotechnology and psycho-neuro-endocrine-immunology will provide scientific evidence in a not too far away future to enable us to understand its subtle action mechanism.